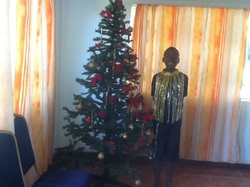 Pennius decorating himself and the tree
Dear All

It is now the end of the first week in 2013 and time for us to wish you all a happy and blessed 2013.  If you are reading this, then like us all here, you have realised that the world did not end on 21/12/2012 as some people had feared, and that despite all the hype that surrounds the festive season, life goes on and has the same demands as last year had, and no doubt next year will have.  I think if I was ever going to predict the end of the word I would make sure I chose a date long after I would have died so that no-one could tell me I was wrong.  I am also amazed that so many Christians seem to try to do this when we are clearly told in the Bible nobody knows when it will be but God.

Anyway, having successfully survived another predicted end, let me tell you a little bit about what has been going on at the Farm.  The end of the year also brings the end of the school year in Zambia, and lots of youngsters have been writing the important national exams at the end of Grade 7, Grade 9 and Grade 12.  So far we have only had the result of the Grade 7 exams, and our 3 boys did very well indeed.  Abel (Mr. Banda's son) scored 796 out of a possible 900, Joshua scored 748 and most surprising of all, "little" John, who is far from academic, managed a creditable 717.  The school was very pleased with all of them, and we now have to organise places for them in junior secondary.  We are still waiting for the results for the other 2 classes, where we have 7 in Grade 9 and 3 in Grade 12.  Of the Grade 12s who are waiting for results, Lingson and Ackim have managed to find short term work as accounts assistant and trainee mechanic, while Kenny needs to show some initiative and find something to do. Lucky now has a permanent job as a trainee accountant at BDO – a large international accountancy firm – where he will study to complete his qualifications while working (a rude shock after school and college!).  It is very strange to see these young men who a few years ago were just abandoned little boys now all grown up and making their own way in the world.  It is also very rewarding.  For those of you who are interested, if you have a look on the website – www.omfzambia.com – you will see a number of photos of the graduation ceremony at school when

Of course not everyone chooses this path, or manages to follow it even if they would prefer to choose it.  The demons of addiction, emotional disturbance and self-loathing – usually as a result of abuse in childhood – are never far away, and many times we find ourselves faced with lads who seem hell-bent on harming themselves in spite of all we have tried to help them with.  It is heart breaking but if nothing else, we have learned that we cannot make choices for them, even when we are sure that they are the "right" ones.  So while we are thankful for the blessing of seeing the guys mentioned above doing so well, we are really saddened to report that some, such as Sammy, Gift, Davis, and Thoko have all chosen to leave and follow a path of self-destruction.  It is also hard to believe that in some of these lads cases they have been encouraged and abetted by one particular individual who spent some time with us as a guest and who now seems determined to cause as much damage as possible to our extended family.  Of course we have been down this road with other boys and some have come back when older and showed that they have remembered a lot of what they learned, so we remain hopeful that all these lads will eventually decide to settle down and stabilise and build a life for themselves.

The year end also brought Sarah our daughter home from Scotland for a short break.  It was lovely to see her again and she was happy to spend time with everybody, though of course she now has her own separate life to lead in Glasgow where she is studying at the Royal Conservatoire.  I managed to visit her while on a business trip to Italy and we are happy she has settled in so well.  We are also very thankful that her health seems to have stabilised, and that she is managing life on her own without any apparent problems.  She has been very well looked after by Kate and Consol Efomi with whom she lodges.

My trip to Italy allowed me to take a week in Scotland to visit Mum and Dad – it was good to see them, and my two sisters again, and have a wee family re-union.  Highlights included dinner at the Dores Inn and a visit to the Nairn Rotary Club, who have been good friends and supporters and kindly invited me to speak.  I also managed en route to and from Inverness to visit a couple of churches in England which support us – Christ Church in St Albans (my first time speaking in an Anglican church!) and Eden Baptist Church in Cambridge. Thanks to David and Shirley, and Jacqui and Gary for making me so welcome in their homes, and to the church folk for their love and support.

Last time I wrote we had been visited by Sally Magnusson from BBC Scotland and her son Jamie who made a documentary on life at the Farm.  We are still waiting for confirmation of the broadcast date but the production has finished and we have been shown the final cut!  It is very strange to see yourself on TV, but the program is fair and balanced, and we are still amazed that Sally, the BBC and indeed anybody would think life here was interesting enough to make a documentary about it.  We will let you all know when the broadcast date is out and if you are interested you can watch it.  For those who don't live in Scotland, and therefore are obviously culturally retarded and deprived, I believe it will be available on iPlayer on the BBC website.  Please let us know what you think when you see it, but remember that it is not possible to tell the whole story in 39 minutes and therefore lots had to be left out.  Our view is that in spite of that obvious constraint, the team have done a great job in capturing some of the "essence" of the Farm.

One other big piece of news is that we are no expecting not one but two weddings among the MacDonald kids!  The first is Iwell, one of the first lads we cared for, who is now 28.   We lost him for a while as he left in pretty much the same way as Sammy and the others have this year, and crashed and burned, eventually ending up back on the street for a while, but he pulled himself together and has worked hard to get employment, and is now a very nice, responsible young man who wants to settle down and start his own family with a girl he cares about dearly.  It is so nice to see him having come through all the trauma he suffered and he gives us hope for many of the others.  The second wedding is for Sibeso.  She is the older sister of Kenny and Humphrey and she stayed with us for a while after her mother died, although we could not keep her long term.  She has a job as an accountant and is studying for her qualifications in the evenings.  She has worked incredibly hard to achieve what she has done and we are very proud of her.  She was recently baptised at Kabwata Baptist Church – the same day as her brother Kenny – and her fiancee is also a member of that church – and an auditor!  She has asked me to give her away as her father is also dead, so I will have to dust down my kilt and invent a father of the bride routine.  Christine has been roped into making the cake, and we will try to host the reception from the Farm with the local church.  It will be an experience for everybody.

I can't finish this letter without a reference to a remark I made in my last one about the unfairness of the anti-male bias coming out of the West into places like Zambia.  You may recall I said:

"I drove behind a garish pink car the other day which proclaimed that it fought for the educational rights of the "girl-child".  It belonged to a charity called 'Because I'm A Girl'.  I am very much in favour of helping children in need of both genders, but just a thought…  imagine the screeches of outrage, the cancellation of donor funds, and the general condemnation an organisation would face if it was called 'Because I'm A Boy' and refused to help girls."

This seems to have hit a chord - and several raw nerves! I realise of course that it is completely politically incorrect to suggest for one moment that males – and in this case boys – can ever be discriminated against as males (though they can be on the grounds of race, colour, sexuality etc), but I wasn’t trying to make any political point, correct or otherwise.  I just cannot see how the discrimination girls have suffered (and continue to suffer) is corrected or compensated for by discriminating against a new generation of boys.  Wouldn't we better to regard both boys and girls as human and equal in rights irrespective of gender?  When faced with the realities of the consequences of this anti-boy bias as we are every day it is hard not to get cynical.  Yet in the last two weeks we have been confronted by: a school set up by a UK charity which gives excellent free education to poor kids from rural areas, and follows a policy of selecting 2 girls for every boy regardless of ability; and by a major US funded Christian charity which looks after abandoned kids and has ALL its girls placed in good private schools by a UK funding organisation, while its boys have to attend government schools with one textbook for a class of 70, because they are NOT girls.  Surely discrimination is always wrong?  And surely even the most hardbitten and determined feminist can see that hindering boys because they are boys is hardly likely to produce a generation of men who respect the rights and dignity of women.  And without that we seem locked in to repeating the mistakes of the past with the same consequences for women, men, and their children.  Oh well, no doubt I will be corrected shortly after sending this out!  Please accept my apologies in advance for any offence caused.

So the joys and sorrows, good times and bad continue.  Sometimes its hard to keep going, especially when depression kicks in and life in its entirety seems pointless, but we know of and value the goodwill, support and prayers we continue to receive from so many of you.  May 2013 be a wonderful year for you and all yours.

Don, Christine and the kids